In no particular order…

#1.  Dr Fish – The fish pedicure. It’s unexpectedly relaxing to have little bitty fish nibble all over your feet removing the dead skin.  The first time it was a little gross but it immediately crossed over to becoming really, really cool.  Also, it costs only $3-4 for an unlimited amount of time so it’s a fun inexpensive afternoon.  It’s nice to just grab a book, a cushion for the floor and sit back and relax.

#2. Bendy Straws – Most all restaurants will give you brightly colored bendy straws just like when you were a kid.  It’s a little something extra that’s always guaranteed to make you smile. From the kimbap shop on the corner to fancy Italian restaurant downtown… if you get a cola, you get a bendy straw.

#3. Kawi Bawi Bo – Everything here can be solved by a simple game of Rock, Paper, Scissors.  Everything.  From disagreements in the classroom, to who will pay for dinner, to whatever the intoxicated men outside my building at 3am are conversing about. It’s not uncommon to be in a restaurant and see a group of 40 year old men playing Rock Paper Scissors.  I wouldn’t be surprised if their president was secretly voted into office by a closed door game of Kawi Bawi Bo.  It’s hardcore here.

#4. Sweet Potato Pizza – Love it.  I know it might not sound appealing, but for those (like me) who adore sweet potatoes - it’s delicious.  It’s more often made using mashed/whipped sweet potatoes but occasionally slices.  The slices are less good, but still yummy.  While discussing sweet potatoes I have to say that I love this country purely for how versatile they have made the sweet potato.  You can eat it everyday in a hundred different ways.

#5. Noraebang – Love.  It’s hard not to.  Well, at least for me since I was born to be a popstar. (I missed my opportunity earlier in life.)  In a noraebang you can sing and dance your heart out like no one is watching.  It’s a great time.  You can rock out anything from Britney Spears, to Nirvana, to Eric Clapton, to George Michael…and anything in between. 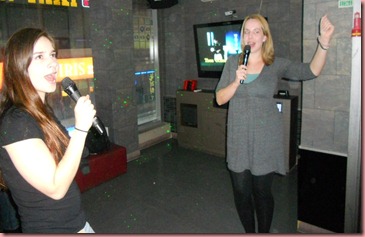 #6. The Golden Arches – At lunchtime a Big Mac meal or Chicken McNugget meal is $3.  Less than actually, $2.70.  Beat that America.  And if you eat in the restaurant you get your drink in a real glass.  But no bendy straw. It wouldn’t be McDonald’s without the red and yellow striped straw.

#7. My Dermatologist. He’s become one of my close friends.  Medical care (all kinds) is crazy inexpensive here (and no appointment necessary!) so we’ve spent a lot of quality time together.  Love him.  My dentist and I are also becoming close friends.  After paying only $.30 for one of my office visits (yes, you read that correctly), I’ve decided that he’s an ok guy.

Speaking of which…  #8 is my hair salon. My stylist looks like he fell out of a Korean drama with his trendy highlighted hair. I love that he has an iPad set up with google translate so him and I can discuss exactly what I want done with my hair. (Yet, I have to play charades with my dentist??) We also use it so we can maintain friendly conversation as he cuts my hair.  How does he type his side of the conversation while he’s cutting my hair, you ask?  Simple.  He dictates to the young girl who was hired for no other purpose than to keep my hair brushed out of my face as he is cutting and styling.

#9. Ajummas. The real definition of an ajumma is a 40 plus year old married Korean woman.  The more slang definition is a feisty little old lady in sparkly jumpsuit, oversized visor and a frilly rhinestoned umbrella.  They think they own the place.  And from what I can see, they do. The story behind them (I can’t validate this it’s just what I’ve been told) is that they made it through the Korean war so they deserve immense respect.  However, there’s a fine line between respect and entitlement. You’ll get elbowed on the buses, forced out of your seat on the subway, and I personally have been pushed out of the way by being prodded with an umbrella. They’re awesome. 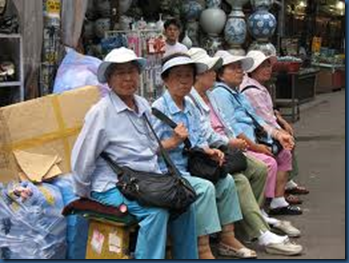 #10. K-Pop. I love K-Pop. It’s bubble gum pop at it’s best. Here’s my new favorite song-Golden Lady. And notice how the ladies keep all their clothes on in the music videos?  I think that’s nice.