My friend Lily recently moved back to America and for her goodbye extravaganza she wanted to try paragliding.  I jumped on this idea immediately. I went hang-gliding when I lived in Orlando so I was eager to add this to my list as well. We used a company called ParaLove Paragliding School and you can access their website here. (It’s all in Korean.)  You can also email Jay-J, the owner, as he speaks excellent English and will help you set up an experience.

On June 23rd, Lily, Becki and I spent a Saturday morning traveling up to Asin station which was nearly two hours west of Seoul. Once we got to Asin station, Jay-J sent one of his employees to come pick us up.  In a mustang. 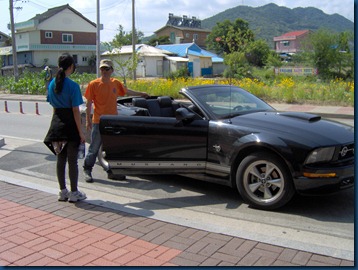 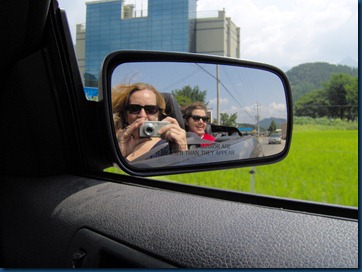 You don’t know how cool that is until you’ve spent almost two years in Kia and Hyundai country.  We rocked out to Lady Gaga and Nickelback the whole way to the landing site.  It was amazing. I sincerely felt like I could have gone back home a happy girl at this point.  Who needs paragliding when you have a convertible on a beautiful day in the mountains?

Once we arrived, there were probably a dozen people in the air, on the ground, and preparing to go back up again. We were the only foreigners.   Plenty of businessmen and students were out for their weekly flights. Apparently this is what they do most days and every weekend. This is their backyard. 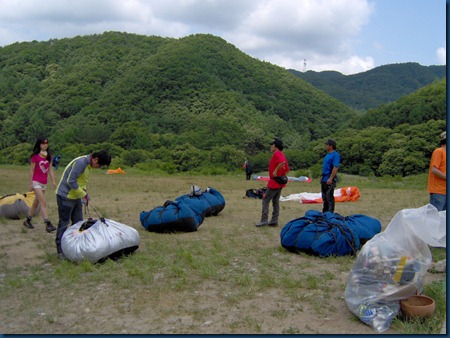 Once our guides were on the ground they drove us over to their office.  We thought we were going to have to sign waivers, something making them not legally responsible for us “in case of”, perhaps a bit of training as well. Nope. They needed coffee and we needed somewhere to put our bags.

About 14 of us then crammed into a 4-door dually (could this day get any better?!?!) and headed up the mountain.  During the ride up we received our training:

2. Pick up your feet when we land.

That’s all the instructions we needed.  Who knew it was so simple?  The three of us also realized that if anything happened to us that day, no one would likely ever know.  And even if they did, how would they ever find us in backwoods Korea?  I had no idea where I was and even the company only knew my first name.  At this point we took a quick minute to do the whole “this is how to reach my family if anything happens. DON’T tell them over email, contact them and arrange a way to call them if I die.”   It’s important to be responsible when you are running off of mountain tops. 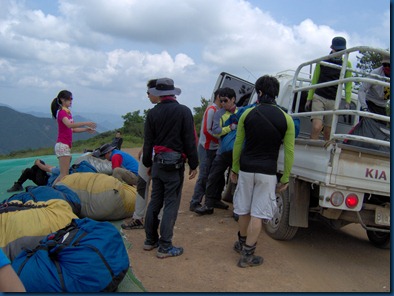 At the top of the mountain we were dressed by our guides and instantly became Ghostbusters. 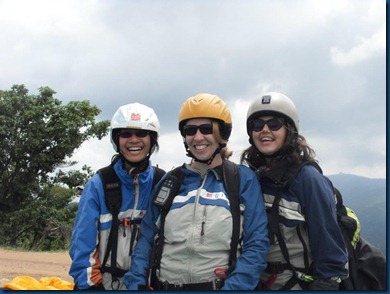 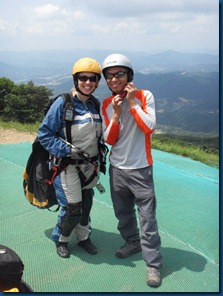 I was very fortunate in that Jay-J was my guide.  If you go with a group you should make it your objective to befriend him.  We took off first and came down last.  My time in the air was probably twice what everyone else’s was. And really he only took me down because he realized that Becki and Lily were already on the ground.  Jay-J rocks. 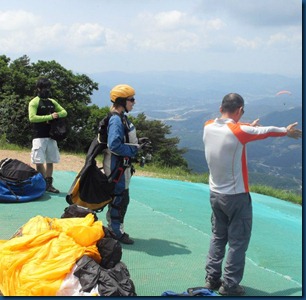 Last minute reminder: run straight. Crap. The idea of running full speed off a mountain with a 90 degree drop is not my idea of a good time. Parachute or not. We very literally ran off the peak of a mountain Road Runner and Wile E. Coyote style. My feet were still grasping for ground more than a few steps in mid-air.

Part of our experience included in-air photos and video… 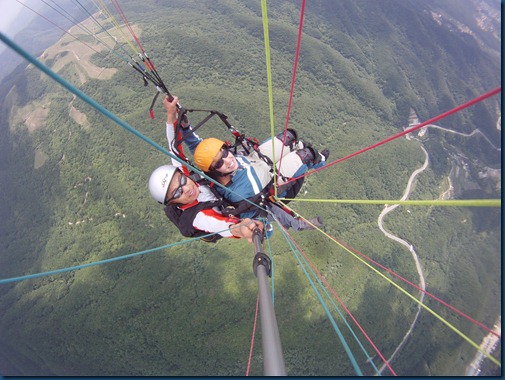 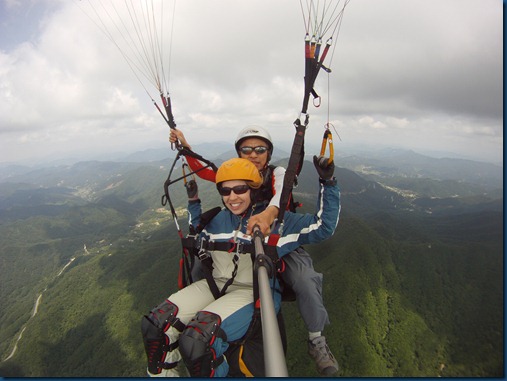 At our highest we reached around 900 meters. Then the descent… 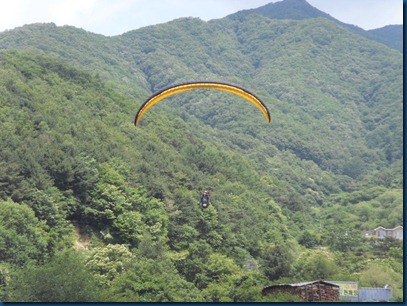 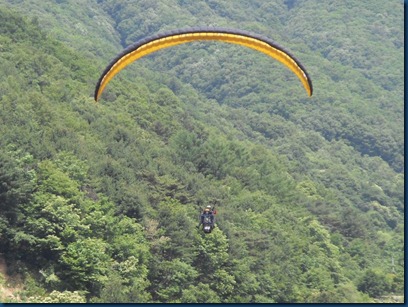 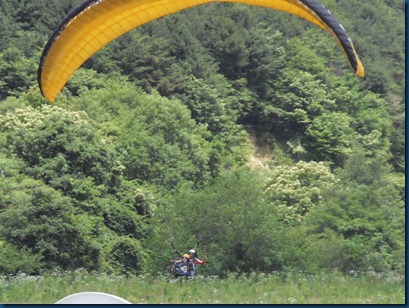 And the video… I’m so lame. I’m actually a bit embarrassed to post this but oh well. I’ve probably posted worse in the past.

Yes, my (potential) dying wish was to make sure my dogs were taken care of.  In a foreign country you can’t be too safe.  And, you can’t deny a girl’s dying wish.