Because I’ve been living away from home for so many years the idea of the not being home for holidays isn’t as traumatic as most seem to think. I love my family but I don’t think anyone can truthfully say that holidays are the happiest of times together anyway.  With the great company and great food comes great stress and inevitably great arguments.  (Every family is like this, don’t act like yours is any different.) I made it a point to spend a few good days with everyone in my family before I set off to SoKo a little over a month ago, so I’m ok with spending my holidays with a huge group of foreigners (literally and figuratively.)

Thanksgiving Day here was incredibly uneventful since this is not a Korean holiday. The Korean equivalent is called Chuseok and is a three day event in September so I will get time off for that next year.  I worked Thursday, just as everyone else in Korea did, and then the foreigners celebrated all weekend long.

Saturday I went to Lee Ann’s where we had a potluck Thanksgiving. There were eight of us and we each made a dish or two. It turned out great.  I met a lot of new people and had such a fun time!  Thanks to Nadia for the photos. I completely forgot to take pictures. 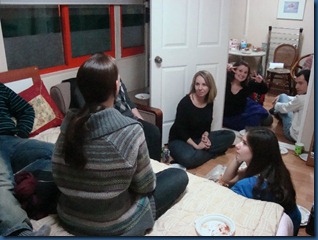 Korean apartments don’t provide a lot of space (or seating) so we just sat where we fit. 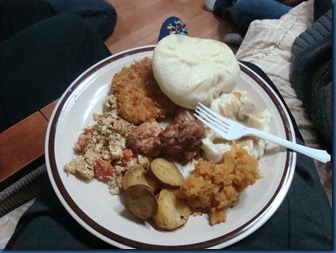 We had sweet dumplings, pork, tandoori chicken (which is really good!) mashed potatoes, sweet potatoes (both mashed and fried), cranberry sauce, and more that I can’t remember.  And of course pumpkin and apple pie from CostCo.  It was all really good!

After dinner, we went to noraebang (the Korean karaoke) down the street.  That has to be my favorite thing about Korea so far but my throat was sore all weekend so I didn’t do much singing.  Evenso,  it was so much fun. I meant to take a picture of the room we rented but again, I forgot.  Noraebang here is so much classier than karaoke at home.  You get a private room for just your group with an overstuffed, suede-like sectional, and a disco ball.  It’s great because it’s more about hanging out with friends, not acting a fool in front of people you don’t know or trying to prove your American Idol worthy-ness.

Around 11, I took the subway home to walk Charlie and I still had a goodbye party to attend that evening.  Ross and Nicole (who are AWESOME) are leaving on Tuesday so they had their big farewell bash.  I meet everyone at Yellow Taxi, and we stayed there for a while playing pool or listening to music.  Around 2am we headed off for more noraebanging. This time the group was about 20 people, most of whom had been drinking for hours.  I took my place comfortably on the couch and found great amusement in the hour and a half that followed.  It was awesome.  Sometime around 4am, and in the freezing cold, I grabbed a cab, went home to my nice warm apartment, and fell asleep.

When I finally woke up on Sunday, at a time I will not reveal, I had to start getting ready for Thanksgiving Part 2.  Marisol and I had made reservations at VIPS last week for 18 people. During the course of the week, a few people had to help in upping the reservation to 28, which included two private rooms. VIPS is a steak house so it’s kind of the honorary American holiday restaurant.  In honor of the holiday I dressed up in my new Korean-like outfit. Everyone here wears sweater dresses and tights.  I have never worn sweater dresses and I’m pretty sure I haven’t worn tights since grade school. I think I rocked it though. And my cab driver seemed to agree. 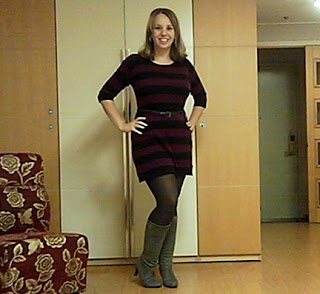 VIPS has a huge buffet (American-ish) to go with their steaks.  The plan was to fill up on the buffet, then take my steak home so I could have it the next day.  Instead I ended up eating it around 2am because I couldn’t sleep.  Whoops. They had shrimp on the buffet, and as you know, my heart belongs to shrimp.  But the shrimp were whole.  Like completely whole.

I can’t eat anything that has eyes but I also can’t walk away from a good shrimp.  The trauma. Against all my fears I went with it.  I figured, “get rid of the head and it will be normal then. You can do this. ”  And I did just that.  I got rid of the head and OUT GUSHED THE BRAINS.  I can’t do this.  I quietly sent my four shrimp away with the waiter.  I have never done that before.

The rest of it was pretty good.  The steak was amazing, the buffet was normal- nothing fancy, nothing awful, then vanilla and green tea frozen yogurt with almonds for dessert.  That was pretty yummy. We also took a few photos in classic Korean poses. 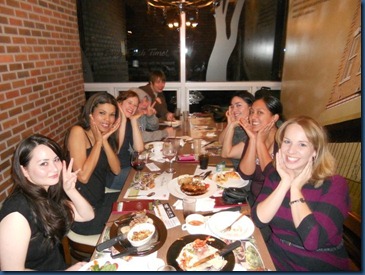 After dinner I tagged along with Nadia, Lee Ann, Jessica and Trisha to go see Due Date.  I haven’t really made up my mind about it yet.  It was a really funny movie, but some parts just pushed too hard.  I felt like they were just trying to repeat The Hangover. It was still good, just maybe a little overdone.  Movies theatres in SoKo will be another blog.  This one is already too long.
Posted by Amy Kate at 11/30/2010 12:50:00 AM